The 2022 NFL season kicked off its 103rd season on September 8th, with the defending Super Bowl champions Los Angeles Rams losing to Buffalo 10-31 in the opening game. There have been plenty of shocks and superb action already, and with the lots of games left to play, there’s lots to look forward to.

The Philadelphia Eagles, Baltimore Ravens and San Francisco 49ers have played themselves into the Super Bowl conversation according to the latest NFL odds. While the Rams, last years winners, are starting to drift after some disappointing performances that will concern head coach Sean McVay.

Already there have been some standout individual performances on the field, that have highlighted once again, just what incredible athletes football players are. Many players are capable of playing a multitude of different sports to an exceptionally high level, while no team is lacking a wide receiver who wouldn’t look out of place running the 100m at the Olympics.

Different positions require different athletic abilities in order to compete at the elite level. Below we take a look at some of the best athletes in their positions, and the incredible abilities they bring to these positions.

Linemen are considered the strongest people on the team, but that needs to be combined with raw power in order to utilise their skills effectively. Size is obviously a factor here – you’re up against huge guys and you have to plug or make gaps – but the modern-day lineman is not carrying excess body weight, it’s pure muscle. To carry that muscle weight and maintain speed – of both hands and feet – is also a vital skill and these elite athletes are capable of it all, none more so than Aaron Donald.

Regarded as one of the greatest defensive players of all time, he has received a record 3 x Defensive Player of the Year Awards (2017, 2018, 2020), Pro Bowl selections in all eight of his seasons, seven first-team All-Pro honors and A Super Bowl LVI ring.

You need incredible speed as a WR to make those runs and break your cover, likewise a defensive back needs to be quick to keep up. But it’s not just speed in a straight line, it’s short and long bursts, twists and turns. Great hands are crucial too, whether it’s a defensive interception or covering a pass, or a wide receiver pulling out a catch under pressure in the end zone.

Tyreek Hill is regarded as the fastest player in the NFL right now, and for many he’s the best wide receiver out there too. His honors include 6× Pro Bowl (2016–2021), 3× First-team All-Pro (2016, 2018, 2020) and Super Bowl champion (LIV), and speak to his unique athletic abilities. His impressive form has continued into 2022 despite leaving Kansas for Miami, with Tyreek leading in reception yards. With his unique abilities, Hill is on the list for the best athlete in the whole of the NFL right now.

The most important position on the field requires a lot of qualities in order to excel at the top level. A quarterback needs speed, agility, footwork and strength in the pocket. He neds to be able to take a hit, ride a tackle, make a split-second decision, run and throw. Most importantly, he needs a great arm that is just as capable over long distance as it is short.

Winner of the Heisman Memorial Trophy in 2018 – awarded to the most outstanding player in college football – it is no surprise the Cardinals selected Murray as the number 1 overall pick in the 2019 NFL Draft. He went on to earn NFL Offensive Rookie of the Year honors (2019), and was also named to the Pro Bowl twice (2020-21). Murray also became the first player in NFL history with 70+ passing TDs and 20+ rushing TDs in his first three seasons.

A mixture of speed, agility and power, make running backs some of the most complete athletes on the field. An ability to mix it up, react quickly and combine speed and power to punch through defensive lines are all required. One the best around at the moment is Jonathan Taylor.

The Benefits of Sporting Events 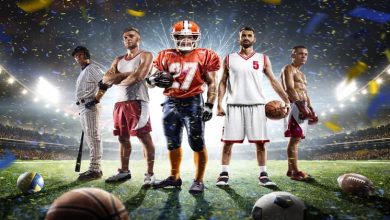 Sport Vs Sports – Are Both Correct?